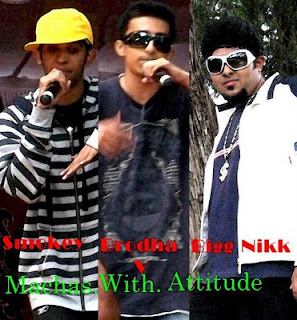 (Official Introduction Re-vised By Illusion)
Hip Hop in India is Just Born. MWA was started by Bigg Nikk, soon joined by Smokey and Brodha V and thus ” Machas With Attitude – MWA ” came into existence on June 14th 2008. DJ Sameer J was also included later into the group. One of the most controversial group in South India, the MWA have influenced Hip Hop in India in a massive way. Because every rapper has a Different style and Different flow on every track. MWA caused major impact in the first month itself . Be it Patriotic or Sad or Funny or Angry or even a blend of all emotions – any type of Song MWA “Make the Difference” everywhere!
Illusion (writer on this blog) got Smokey from MWA here in a tête-à-tête converstaion with her and to announce the release of their First Studio Album. Excerpts :-

Illusion: (First Question) Tell us something about your crew “MWA“….as in the history?
Smokey: Basically, MWA is Brodha V, Smokey and Big Nikk ,well we started off as the BR Soldiers , a crew on Orkut and stuff but went on to start making audios and big Nikk suggested the name MWA ” the Brahmins “, we’ve been rapping since around a year, June 14th 2009 will be one year, we have worked hard to get we are since then and still trying, we will be coming up with our full time Album Soon! The work is on the progress, that’s what MWA is all about!.. Rap and we out to save it!

Illusion: Hey, congrats for your new album. Upping it! As you know the road to success isn’t an easy one. It’s surely taken a lot of determination to reach where you are today. So how does it feel to be at this position so early in life?
Smokey: Well, me and V are 18 gonna be 19 soon!, what do I say, it feels like a Million Bucks!! You know what it is.. there is no replacement for hard work and when you look so good and rap so Burning Hot, you cant stop in this game ( at least that’s what the girls say ) ..

Ha-ha. Seems like girls have a big part in this journey of yours! Anyway, MWA grew up Listening to artists like Rakim , Snoop dogg , Eminem , Krs-one , 2 Pac, etc. dreaming everyday that they’ll reach the top…So what is that one factor that plunged you into rapping? There are many other genres of music as well.
Smokey: Well, it’s like… “A Baby knows who its Mama is!!”…so we know what our Music is! Rap is like the thing that Comforts us, a way we express what we feel like inside or Sometimes Express how the Common man feels. Moreover it was like a Connection! And we didn’t look back.

The biggest mistake that most bands make is when they try to recruit a new band member is to focus entirely on the musician’s technical ability and chops as opposed to look at other key components needed to make a band successful. MWA just consisted of 3 members but today when it’s at the peak of this glory has 9 members. How do you recruit members to your band? (And are girls allowed?)
Smokey: When MWA is at the peak of its Glory it has 3 members! These are the text battling members! They have been cleaned up and are long gone, these are the BR soldiers, the MWA FAMILY, and as I mentioned earlier we are Brodha V, Smokey and Big Nikk! Well be it a girl or a guy, no one is allowed anymore. The only other person involved is DJ Sameer from Chennai. He’s a active part of the crew but we are the main peepz who do the game!!

Tracks like Fire on thin Ice, MWA created a lot of Quakes in the country and turned out to be major hits. We, as listeners, just hear the song and comment on it. But what goes inside the studio is best known to you people. What is the order of steps while recording an audio?
Smokey: Well it depends. You see the Studio is something else, you have to get your Practice right, and there is a small line between professionalism and being totally shitty. People don’t see how hard one has to work on the beats and Lyrics and Vocals and make sure the clarity is awesome, we’ve recorded for a few movies and when it comes to recording for a Movie, we gotta do what the music director wants. If it’s for our own Album, we are allowed to do what we want but we have to predict what the other person likes. Have to think how many commercial and how many non-commercial song we have to make, get the copyrights done, impress the sponsors (which we will), and finally come out with something great, which we promise to do. Cause lemme tell you, this album, your gonna feel it, your gonna play it and gonna scream our name out like you never have.

Sure, I’m expecting a lot from you people and I know you gonna live up to it in every way. Since the talk has shifted to Movies now, MWA have a great variation in their lyrics with Tamil/English and even Hindi being the pick! MWA has also given background scores to many Tamilian movies (“Aayrithul Ore Van” being the first)Except movies and albums, what other avenue would MWA like to set their hands on? Would it like to share stage with International artists as their “ULTIMATE DREAM”?
Smokey: Well its not that we wanna Share the stage with international artist, we wanna be that international artist <- that’s the "Ultimate Dream", there is no end to reaching to the top, we will keep going and we are set to make our sing and song for a upcoming Movie by GV Prakash, also we are due to meet A.R. Rahman in June or July. Hopefully that will happen but talking real, we will set our own footsteps into the Industry and we will be international, there is no doubt about it, and will work hard for it! (Which I think every band has to do) Focus on the path and keep walking, well it’s easier said than done, but yea, we’re on it, don worry! We’re gonna be in that speaker of yours.

Well, wish you all the luck in the world. MWA’s progress is indirectly related to India’s progress. Being an Indian, It is already a privilege for me to conduct this interview with you.MWA has a positive approach to life. They’ll be setting goals for those who will follow them and on the same lines, who is your inspiration?
Smokey: For Brodha V and Big Nikk, its 2 pac and for me (Smokey) its Eminem .We’ll we are a little Choosy with the way we bring our Priorities. We are what we are and I would like to say that, I think our Parents are our greatest Inspiration and most of all, we love to prove people wrong and it’s become a blessing!! Indians can rap and can rap well. Keep faith in the one above and you will be blessed.

In God we trust. (shifting to the legal side) Unless you are a certified band Name, you won’t be able to perform anywhere in the world. Do you have a written ‘band agreement’? Have you registered your songs for copyright protection with the Indian Copyright Office? Do you have an entertainment law attorney to consult with? Are you financially able to fund the costs of establishing your career?
Smokey: It is not necessary that we have to get the band name certified to perform but to put out the album and to rap in movies, the producers make sure that happens and we’ve got the copyrights to the songs that have our own beats and own Vocals on. The rest is borrowed from some people like Shadowville and Seandivine, they are beautiful beat makers and have been helping us in promoting ourselves. They have confirmed that unless we use it for album purpose we can use their beats but we coming up with our beats on the album so for the Promos, we use Sean Divine! He’s great. Yes our sponsors make sure we are financially fine.

News can make or Break a person. As far as MWA goes, life hasn’t been a bed of roses for you all. You faced criticism from some of the rappers here in your Hometown. Does MWA give a damn to them? Or Let the Music do the talking? Does that affect you emotionally sometimes?
Smokey: We Laugh. That’s the only way it has affected us! We have put all of them off their feet and we are proudly standing because we know where we are and were they are. Some people claim to have murked us but see I told u they make me laugh.

Illusion: He he! At times, when success overpowers your conscience, proudness emerges. Are you over- confident of our own selves at times? I mean like stars today, you need a Manager or MWA is better off managing gigs, films, audios by themselves. Every decision is taken mutually or are there any disagreements between band members?
Smokey: They are Lots of fights. Me and V and Nikk fight regularly, it’s a part of our band you see. It makes a better band to be very frank and we manage our gigs by ourselves. Success overpowers conscience when u let it do so! Proudness is something that every good artist has to have and in the end because of all these fights, we end up making Songs like what we have. I’m sure you have heard them and you’re bouncing to them.

Illusion: Those Foot- tapping beats and hardcore vocals. They’re playing on my IPod all the time (to be really frank) what are you future aspirations? Would you want to get into mainstream Bollywood? First conquer India and then set the Outside world on fire?
Smokey: We aim at both right now. If it comes in our way, why not? We are going to Mauritius this New Year’s eve. That’s booked already plus we’re doing well in the Tamil industry.

(Last Question) Tell me the name of your first solo Album and its release date? Any message to the world? Any thing you want the world to watch out for? Any message for future rappers?
Smokey: The Solo album and the release date is kinda a Surprise because our Promoters are one of the greatest. Well, all I can tell u is. They’re international. Watch out for us, you will have to even if you don’t want to and for the future bands I hope they come up, my haters; I hope they do well too!! May god bless them all!!! One love =)
Illusion: Thank You for your precious time. You were wonderful throughout.
Smokey: You’re Welcome.
Smokey’s Autograph for Desi Rapper Show :-